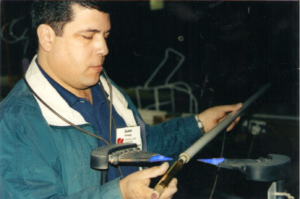 Also known as the neon glassblower. You could say the neon glass bender is an endangered species, i don’t know how many of us are still battling the heat in the neon room on a hot summer day trying to keep the sweat from falling on the last bend, because if it does it will break instantaneously.
You could say I started in the neon glass bending business late in life I was about 35 years old when I first had my encounter with this craft, art or whatever you want to call it. And for a while I almost didn’t get into it, I was hesitating because it looked difficult to learn.

The Story Of How I Started

Well, it all started back in the past century, on a hot summer day of 1988. I started working part time in a sign company analyzing the financial side of the business because the owner (relative)wanted to know where the money was going to, and the way to better manage his business. I was in between jobs (unemployed) and I had some experience in finances so I went ahead with the task.

While doing that I got to know a lot of the sign business and I liked it, one day the glass bender quit, after 25 years in that company he just quit and went ahead to establish his own company, which by the way is still doing very well. So the owner was without a glass bender again, that had happened to him 4 times in the  years that the company had been in existence, he always said that the glass benders always left to do their own neon, that last glass bender was the first one that had lasted the most.

I saw how two guys tried for about a month at training for the open position but gave up, meanwhile, a friend of my relative who used to work for him as a glass bender but had his own business now was coming over to do the bending for the jobs that had to be done. But he couldn’t keep up with his work in his shop and helping out at my relatives place, his name is Alfonso Acevedo (RIP), my neon glass bending teacher, to whom I am eternally grateful, gracias Poncho.

That’s when my relative asked me if I wanted to learn to bend glass, I told him that I was going to think about it, he then told me, well make up your mind fast because I can’t wait forever.

I went to see the glass bender work, to see what I was getting myself into, that is if I decided to go ahead .The first thing that hit me was the heat, it was summer and the temperature outside was about 100 degrees and inside the neon shop, it was about 115 deg. but the glass bender convinced me to go ahead and learn .I remember what he told me, he said ” There are only 3 glass benders in the whole city and we have all the work that we can handle” and he also told me “”you can make even more money making your own neon and selling it, I don’t think your relative would mind “

That did it, I started the next day.

Two months later I managed to do a very simple sign , it took me about eight hours of pain and suffering to do it , that day my teacher didn’t come to work because we were up to date on the jobs, so i took the whole day to do that sign , the next day when he came in he took a look at it and said “sorry it’s not good enough”, and told me to save it so i could compare my progress later. Two months later one day he told me that he had a big job and that he would not be able to come for about a month, so i was on my own, i did the best i could, and more than once the installers laughed at my work. But as time went on i got better and was able to do all the jobs.

Four years later my relative had to close the business due to the bad economy of the time just like the one we are in right now, but two years after that he reopened his business, with a lot fewer employees and a lot smaller place but he was back on his feet. He passed away 3 years ago at the age of 95, his grandson took over the business and is still in business today trying to keep afloat in this economy, but doing well.

Well, that’s my story of how i got started in this business of neon signs, been doing neon ever since and love it , plan on doing neon until the day that I die.
Amen

I’m still alive and well thank God for that, the virus has not found me yet and hope it never does because I’m one of the people at risk, 67years old, overweight and with high blood pressure so i am taking all the measures possible to not be infected, but for now I’m still here doing neon and everything related to neon, i had to put this update because a lot of people call just to see if I’m still alive because they don’t want to order if I’m dead and i don’t blame them, so thank you all for dropping by to this page.

I survived the virus and still here, hopefully no more viruses coming

It looks like the virus is gone and i did not get infected but something else happened that was a bit scary, well a lot scary, it turns out that last year ( 2021)around June one morning i got up (like i do every day after a good nights sleep ) and i went to the lavatory to empty my bladder but to my surprise instead of the usual color it came out red, holy molly i said whats this, i asked myself, so i did what every man would do, i called my wife to show her the red stuff. Oh my God she said, that’s blood, what no that can not be i said , yes she said i’ll make you an appointment with the doctor right now, after 5 minutes she said, the doctor will see you tomorrow at 1pm. ok thank you i said, so all that day i kept producing red piss, (urine) but the next day i got up with an incredible pain on my right side on the front and back, it was so intense that it made me throw up, and i was sweating cold, again i called my wife and told her, take me to the emergency room at the hospital this pain is killing me, so we went and the doctor told me, don’t worry it’s probably a stone in one of your kidneys, let take a CT scan to see the size and see what we can do, by then they had put me on a pain medication that took the pain away and on a nausea medication and that was it for the discomfort i felt great, so here comes the doctor and says ” It’s not stones mr Ortega it’s a tumor, and a big one he said, it’s attached to your right kidney, and it’s probably cancer, 90% of this tumors are cancer, i looked at my wife and we both looked at each other without saying anything, and then i asked the doctor, so now what, and he said ” You got to see a Urologist, he will take over now. So long story short or not so long, two months later i was on the operating table, they took out the right kidney and the tumor the size of a softball, and about 10 days later the pathologist (who examines the tumor) said stage 3 cancer, but the good thing is that it had not spread, it was contained so I don’t have cancer anymore, but the Oncologist has me on a treatment to fortify my immune system just in case the cancer comes back for a second round. So that’s the update.
So just to celebrate that they took out the cancer, me and my wife went on a very well deserved vacation, we went to the the big apple, New York City, never been there before, and we had a great time, we walked like there was no tomorrow, life looks a lot different now after the scare.

I hope that in the next update i’ll report to you that i won the lottery, keep your fingers crossed.

Location of the endangered species